Cooper and his All Stars

12-year old Cooper was born without a fibula in his left leg, a condition which has led to various complications, especially over the last few years.

Following unsuccessful and painful leg lengthening surgery, Cooper and his family had to make a decision; undergo more painful surgeries with no guarantees on outcome, or have the leg amputated.

Cooper decided to have the leg amputated declaring he wasn't losing a leg, he was gaining his life.

Mix 102.3's Jodie & Soda heard basketball loving Cooper's story and shared it with Adelaide and the 36ers. As a surprise and to encourage Cooper with his rehabilitation, Soda took it upon himself to organise a basketball game at Brett Maher Court in the Adelaide Entertainment Centre (AEC) against the 36ers. 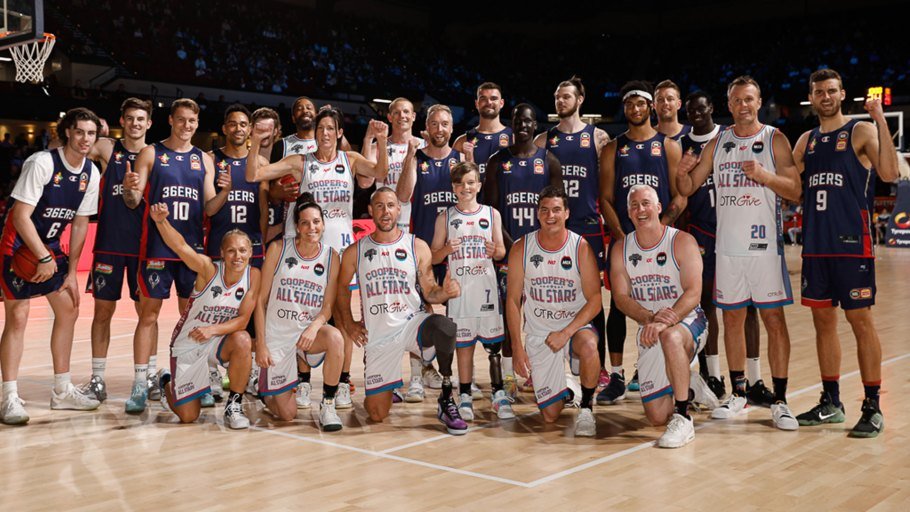 On Thursday, 12 November, Cooper and his All Stars took on the Adelaide 36ers in front of 5,000 fans, the largest crowd to gather at the AEC since the COVID lockdown. Cooper's very talented All Stars were coached by Adelaide 36ers Hall of Fame Coach and Player Phil Smyth and included former 36ers Dean Brogan and Kevin Brooks, former Lightning players Erin Phillips and wife Tracey Gahan, Australian Basketball Hall of Famer Rachael Sporn, and local football stars Sam Jacobs and Tom Rockliff. The team were also joined by special guests Brett Maher, and Jed Altschwager. Brett, whom the court is named after as an inaugural inductee into the Adelaide 36ers Hall of Fame, three-time NBL Champion, two-time NBL Grand Final MVP and three-time Olympian. And Jed, a parathlete with Silver medals at the 2018 & 2019 Rowing World Championships who, as an amputee, is Cooper's mentor.

The final score, Cooper's All Stars 91 defeated Adelaide 36ers 89. The only disappointing aspect of the victory, Brett Maher taking the winning shot from beyond the arc rather than passing to Cooper, who was wide open and calling for the ball. Old habits die hard Brett!